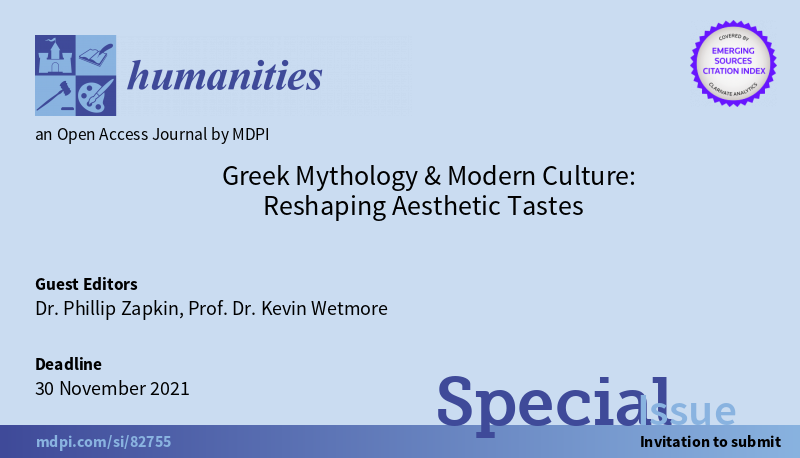 Much of the Western world has a rising problem with white nationalists. These white supremacists often co-opt fields like Classics, medievalism, and Norse mythology to support their racist ideologies—twisting these disciplines and repressing or ignoring evidence for the multicultural and multiracial realities of the ancient and medieval world. In terms of Classics, these distortions and appropriations have been documented by an emerging generation of scholars like Donna Zuckerberg, Dan-el Padilla Peralta, Curtis Dozier, Sarah Bond, and others. Ancient myth, literature, and symbols continue to pervade modern culture.

In particular, Greek myth continues to shape modern worldviews, influence contemporary artists and writers, and appeal to our literary and aesthetic tastes. However, understandings of Greek myth—both in its original context and its reception by later generations—have changed dramatically over time. This special issue of Humanities seeks articles about current research in Greek mythology. Submissions should present cutting edge research about an aspect of Greek myth, prepared for a general audience.

This special issue seeks to offer an impression of the field, with essays presenting different arguments about Greek myth. While this is a broad brief, the issue as a whole should explore the ways in which Greek myth, and debates about it, remains relevant to the modern world.

For more information, including manuscript submission, please visit https://www.mdpi.com/journal/humanities/special_issues/Greek_Mythology_Modern_Culture_Reshaping_Aesthetic_Tastes.
CFP - Journal
Categories
Latest Posts
Archives
We use cookies to give you the best experience on our site. By continuing to use our website, you are agreeing to our use of cookies.OK